Based on the "Math" category.
Alternatively, view flat-mcmc alternatives based on common mentions on social networks and blogs.

Do you think we are missing an alternative of flat-mcmc or a related project?

flat-mcmc is a Haskell library for painless, efficient, general-purpose sampling from continuous distributions.

flat-mcmc uses an ensemble sampler that is invariant to affine transformations of space. It wanders a target probability distribution's parameter space as if it had been "flattened" or "unstretched" in some sense, allowing many particles to explore it locally and in parallel.

In general this sampler is useful when you want decent performance without dealing with any tuning parameters or local proposal distributions. Check out the paper describing the algorithm here, and a paper on some potential limitations here, authored by my friends David Huijser and Brendon Brewer. There is also also a robust Python implementation here authored by Dan Foreman-Mackey, a very nice dude who I once moved some furniture with.

flat-mcmc exports an 'mcmc' function that prints a trace to stdout, as well as a 'flat' transition operator that can be used more generally. 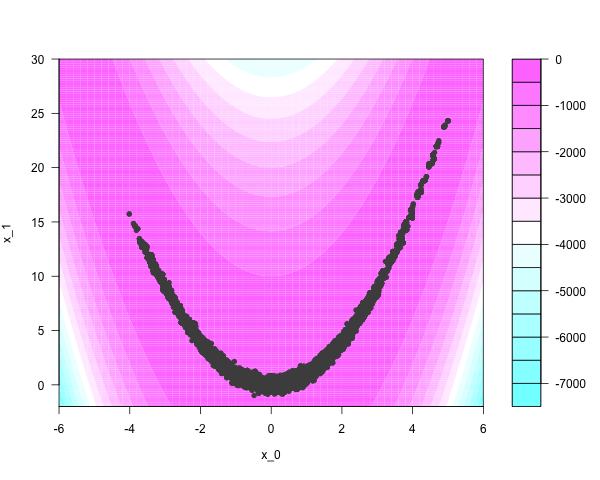 *Note that all licence references and agreements mentioned in the flat-mcmc README section above are relevant to that project's source code only.