A Haskell binding to the wiringPi library, for using GPIO on the Raspberry Pi.

Based on the "Hardware" category.
Alternatively, view wiringPi alternatives based on common mentions on social networks and blogs.

InfluxDB is the Time Series Platform where developers build real-time applications for analytics, IoT and cloud-native services. Easy to start, it is available in the cloud or on-premises.
Promo www.influxdata.com

Do you think we are missing an alternative of wiringPi or a related project?

This is a Haskell binding to the wiringPi library, which allows you to interface with the GPIO pins on the Raspberry Pi. Unlike some other solutions for using the Raspberry Pi's GPIO pins, wiringPi provides access to more advanced features, such as enabling the internal pull-up or pull-down resistors.

To use this library, you must either run as root, or set the WIRINGPI_GPIOMEM environment variable. (Set it to anything; the value does not matter.) However, PWM will not work if WIRINGPI_GPIOMEM is set.

This library will only build on the Raspberry Pi. Before building this library, you must install the "wiringPi" C library on your Raspberry Pi, like this:

WiringPi allows each pin to be identified by one of three names. A pin can be identified by its physical pin number, by its Broadcom GPIO number (this is the one most commonly used in the Raspberry Pi community), or by its wiringPi pin number. The Pin type has three constructors (Wpi, Gpio, and Phys), allowing you to call a pin by any of its three names. These names are synonymous and interchangeable.

The following diagram illustrates the three names of each pin, and also identifies which pins can be placed in PWM_OUTPUT mode or GPIO_CLOCK mode. 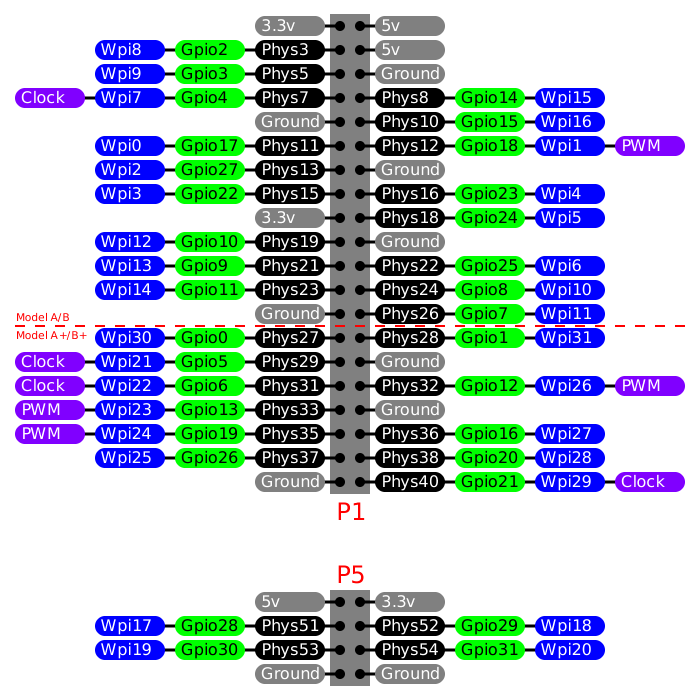 Similar diagrams are available on the wiringPi site or on pinout.xyz.

One additional wrinkle is that some very early Raspberry Pis use different Broadcom GPIO numbers for a few of the pins. WiringPi automatically takes this into account, but it means that equality for Pin actually depends on which board revision you have.


*Note that all licence references and agreements mentioned in the wiringPi README section above are relevant to that project's source code only.