A chat interface for playing werewolf in Slack

Based on the "werewolf" category.
Alternatively, view werewolf-slack alternatives based on common mentions on social networks and blogs.

Do you think we are missing an alternative of werewolf-slack or a related project?

A chat interface for playing werewolf in Slack. Werewolf is a well known social party game, commonly also called Mafia. See the Wikipedia article for a rundown on its gameplay and history. 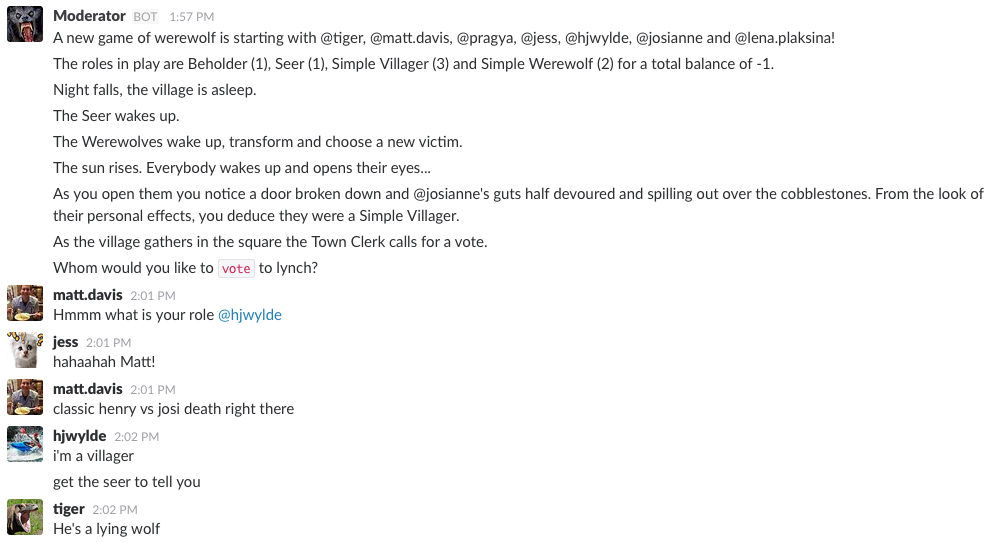 Long has the woods been home to wild creatures, both kind and cruel. Most have faces and are known to the inhabitants of Fougères in Brittany, France; but no-one from the village has yet to lay eyes on the merciless Werewolf.

Each night Werewolves attack the village and devour the innocent. For centuries no-one knew how to fight this scourge, however recently a theory has taken ahold that mayhaps the Werewolves walk among the Villagers themselves...

Set up an Incoming Webhook here. Make note of the webhook url, we'll be using that soon.

Set up a Slash Command (/werewolf or similar) here. The Slash Command should perform a GET request to the server werewolf-slack is going to be hosted on. Make note of the token here too.

werewolf-slack is a simple web server that listens for events from the Slack Slash Command. After receiving an event werewolf-slack forwards it on to the werewolf game engine and uses the Incoming Webhook to send back the response.

Running werewolf-slack is easiest done using either Docker (recommended) or the binary itself. Make sure to add rules to your firewall for werewolf-slack's port.

It is possible to also configure the port that werewolf-slack listens on. This is done via the --port (-p) option.

Type /werewolf help in your Slack channel to get going!