Use jsx-like syntax in Reflex

Based on the "reflex" category.
Alternatively, view reflex-jsx alternatives based on common mentions on social networks and blogs.

Deliver Cleaner and Safer Code - Right in Your IDE of Choice!

SonarLint is a free and open source IDE extension that identifies and catches bugs and vulnerabilities as you code, directly in the IDE. Install from your favorite IDE marketplace today.
Promo www.sonarlint.org

Do you think we are missing an alternative of reflex-jsx or a related project?

reflex-jsx is a parser and quasiquoter that lets you write html-like syntax inside of a reflex MonadWidget t m instance.

What's reflex, you ask? In short, it's a Functional Reactive Programming library in Haskell that compiles to JavaScript for use on websites. You'd use it anywhere you might otherwise use React or Angular.

Here's a quick motivating example. The following code shows a Github badge based on the username you enter, updated as you type.

In regular Reflex, here's what the code looks like (leaving out data types and the XHR)

Here's what that same widget looks like with reflex-jsx:

This would work if your code lives in src and your main file is Main.hs. Make sure you invoke work-on from the parent directory.

So there's no restriction on the element type, and the attributes are (String, String) as it is in Reflex itself.

Splicing in an expression as a node

Splicing or Antiquoting is where you can embed a haskell expression inside of the quasiquoted value. You can embed an expression anywhere you'd normally put a DOM node, and you escape it with {}. The constraint is that any expression you pass in needs to evaluate to MonadWidget t m => m a - which is the normal type for any elements, static or dynamic.

For example, you could embed a simple text "value" that is unchanging, or a textInput element that changes over time. The only thing to remember is that you can't currently get values out of the nodes you insert, so for more complicated data flows, you might not be able to use a jsx block at all. In that case, it is probably easier to use functions anyway.

Here's a more meaty example from a food tracking app:

Or, take a look at the syntax-highlighted version in Emacs if you tweak your haskell-mode slightly. 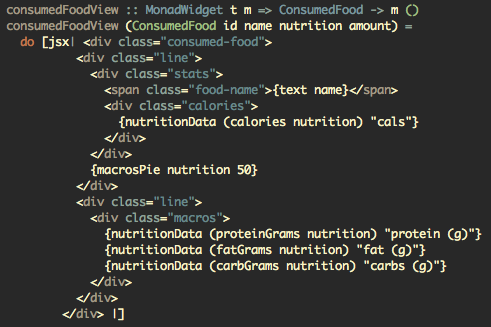 Notice we have a component that takes in a ConsumedFood with some values, and splices them into the jsx body. First we have {text name}, which is using the reflex function text :: MonadWidget t m => String -> m () to take a constant string and display it inside the span.

Next, you can see some more complicated splicing. nutritionData is itself a custom component created in this file, and is a MonadWidget t m as well. You can put any haskell expression inside the curly braces, as long as it evaluates to a reflex widget. The other examples here are just more of the same type of calls.

Splicing in a String attribute

The example above lets you splice in your own nodes, but you can also splice in an attribute value. For instance, you can do something like this:

Splicing in a dynamic set of attributes

If you replace all of the attributes, you can pass in a set of dynamic ones. To do this, you pass in an expression that evaluates to a type Dynamic t (Map String String). This means you are passing in a Map that changes over time, and the attributes will update and re-render automatically as necessary.

Here's an example of modifying a color based on a text box:

The value (_textInput_value input) returns a Dynamic t String of changing input box values, and then the mapping line creates a dynamic map value with the color equalling the current textbox value. This gets spliced in as the attributes to the div in the jsx body, and causes the text to dynamically change color.

Failed to load interface for Gtk2HsSetup

This is due to the following issue: https://github.com/gtk2hs/gtk2hs/issues/179 .

The fix is to run stack install gtk2hs-buildtools.

Is this the same JSX as React's version?

The name comes from React's JSX, but it's not trying to be feature-for-feature mapping of functionality. It's simply meant to play a similar role to JSX in that it allows the programmer to write HTML-like syntax where it feels appropriate (i.e. HTML-heavy components that don't have as much interactivity).

I almost called it hsx until I discovered that there was already an established package with that name on Hackage.

I imagine Reflex users will want to use this syntax less often than React users use JSX, as Reflex's interspersed return values make some types of components easier to represent with regular functions. I don't recommend this be used all over the place, because the template haskell slows down compile times, and it adds a layer of indirection.

I got a ridiculous looking error

Sorry about that - I actually am not sure how to make the errors nicer. I essentially just splice in whatever you provide as Template Haskell expressions using haskell-src-meta and let the compiler figure it out if it's not well-formed. However, sometimes the compiler gets really confused and fails in a weird way. If anyone knows how to do reliable reflection on TH Exp datatypes to determine what they are (i.e. String vs. MonadWidget t m), then I could fail earlier with a nicer message.

How stable is this?

Consider it extremely experimental. It's not feature complete, and has only been used by me a little bit on a side-project, so far from battle tested. Also, this is my first time working with Quasiquotes and Template Haskell so the implementation might broken. Do let me know if you run into issues though, and I will fix them as quickly as possible!

I have a suggestion for improvement, or want to make a PR

I'm happy to get suggestions on any aspect of the library! I may be doing things unidiomatically and appreciate getting style, implementation, and any other feedback you want to provide. Even better if you want to submit a PR to improve the library.